We passed Ditchley House after an evening drive around the interior of the Northern Neck Peninsula to entertain the dogs and to look at the last of the fall colors. I had already let the dogs out to run at the ferry. The Corotoman River flows softly and flat past the ferry dock at the end of the road. Beside the dock lies a small triangle of river sand, below a bluff with really nice private homes on it. We hadn’t seen too much traffic along the way, but did pass a party in a sharp bend in the road where old blue trucks were parked every which way and people converged on a small gray house with a barbecue going. We felt a little out of place, like tourists, in our big Xterra with two hounds hanging out the windows, driving slowly toward the ferry.

“Beside the dock lies a small triangle of river sand…”

The ferry had given us a destination in our rambling, and from there we wended our way homeward along small roads getting smaller, and crossed the peninsula on Goodluck Road. It was almost my last day there, and I hadn’t yet taken the detour to see the hamlet called Ditchley, at the base of a bay flanked by the two creeks. I had seen Ditchley on my walks out to Hughlett Point. The historic Ditchley mansion, up Dividing Creek from the bay, was once the home of Jessie Ball duPont, a teacher and philanthropist who helped create the Hughlett Point Audubon sanctuary, where I walked a lot during my autumn in Virginia.

The hamlet of Ditchley seen from Hughlett Point

From the sanctuary parking lot in the woods, you walk east through a short strip of lovely swampy forest, cross a grassy flat, and come to the Chesapeake Bay a couple of miles north of Hughlett Point. There’s nowhere to go if you turn left, but if you turn right, it is a different walk every day, every tide, every weather. The dogs ran, and Stellar flew, and Raven ran off, and I walked and walked barefoot in wet sand or dry. I waded in turnunder waves or tidal pools. 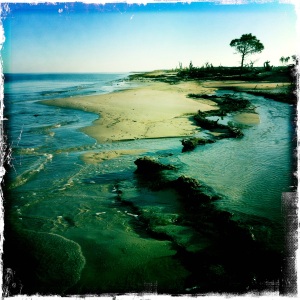 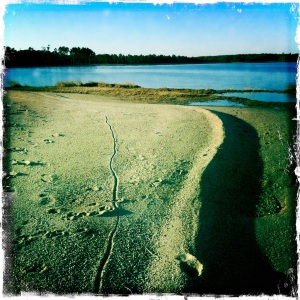 Most days I walked all the way to the point, savoring the sea and sky and solitude. From the very tip of Hughlett Point I could see Ditchley, so I’d always wanted to drive down Ditchley Road and check out Hughlett Point from the bay.

It was cocktail hour when we drove past the mansion’s driveway toward the bay, so we didn’t turn in then, though Auntie insisted we should do so on our return. I thought it looked more like a private drive and I said so a couple of times, but she said, “No, this is Ditchley, it is a private home but they use it for all kinds of public functions. I just want you to see it. We can drive through, theres a turnaround.”

Then she pulled another friend out of her magic hat and said, “Let’s go have cocktails with Jan.” Jan lives on Dividing Creek almost at the bay. She wasn’t home, but we walked out on the dock behind her house and watched for a few minutes as the water pinked up then greyed over, and the sky to the west lit up. The dock had a great view of Hughlett Point, our main objective, and after enjoying that we headed for home. It was dusk, and I was hoping she’d forget about Ditchley.

As we approached Ditchley driveway, a sporty red passenger car turned out of the driveway and away from us. I didn’t like the idea of turning in while they could see us. I was hoping nobody was home. “Turn in, turn in!” Rita insisted, so I made an acute right turn and drove slowly down the brick drive through a huge lawn, toward the brick mansion on the right. The driveway got narrower as it came close to the mansion, and passed directly by the foot of the front stairs. I saw with dismay that there was nowhere to turn around, that the driveway went right up to and around behind the caretaker’s cottage, across a concrete carport with a grill, bikes, a basketball hoop, and worst of all, into a pack of barking dogs. The moment I saw the dogs, I said, “Cover your ears!”

We had to follow the driveway through this very private domain, announced and bayed up by a black lab, a smaller gold dog, and a little cocker spaniel. Our dogs were snarling and snapping and barking their heads off trying to get through the windows for a good fight. It was a tense cacophony. Our car was so big, and the carport so crowded. I was so afraid I would hit one of the dogs snapping at our tires, or that someone would come yelling out of the house. We lost the yellow dog after we rounded the back of the house, but the big and little dogs pursued us another few hundred feet.

When they fell off, my dogs settled down. We had a long quiet stretch, both of us looking straight ahead, until we turned onto the road. Then Rita turned to me broke the silence by saying, with satisfied smile, “Well, now you’ve seen Ditchley!”

I laughed so hard I almost lost control of the car. We laughed all the way home. We laughed through our cocktails. Six months later, we are still laughing about Ditchley, when one of us mentions it over the phone.

Auntie turned 85 yesterday. I cherish every laugh with her and every memory of our wonderful autumn together. What I treasure most about that moment, that smile, that “Well, now you’ve seen Ditchley,” is that it was utterly unexpected. I should know by now to expect the unexpected from my Aunt Rita, it has always been the way she rolls. But in that moment, after the violence of the barking dogs, the awkwardness of our intrusion through a private place, the tension of our escape from Ditchley, and my ingrained sense of guilt, her sweet satisfaction was the last thing I expected.